As a proponent of continuous integration, I naturally don't endorse one IDE over another. The choice should be free and open for developers to choice what works best for them. The important thing is that the project should not be reliant on an IDE to build. That is, there must be an independent build tool that can function outside of any IDE, whether it be ant or maven or whatever.

I have used several IDEs over the last couple of year to include Eclipse, IDEA and NetBeans . They all have their strengths and weakness and for the projects I have been working on, I ended up switching around quite a bit. With the recent announcement of the new Netbeans 6.0, I wanted to revisit it's capabilities and see what was new, particularly with its maven integration.

While the Netbeans installer was downloading, I started to search for what plugins I would need to do maven->Netbeans or Netbeans ->maven project conversions. Most of what I found looked outdated and didn't look easy to use. With a little stumbling around I found out that the Mevenide project does now support Netbeans 6.0 (this is not apparent on their Netbeans project page). So I installed the Mevenide Maven2 plugin.

And was blown away!

There is no conversion of project types from maven->NetBeans . It just works natively. File > Open Project and browse for your existing maven project. Bingo.

I actually started by opening a parent project, <packaging>pom</packaging>, thinking that the Mavenide wouldn't know what to do with a multi module project, but it just worked, too! It showed me the project files, libraries, test libraries and the modules that this parent included. Too cool. 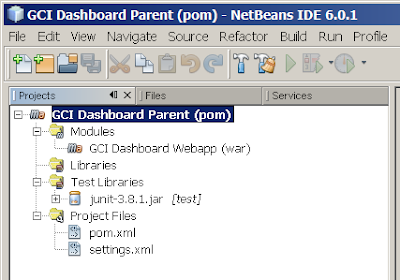 So then I double clicked my war module name hoping for the best and was not disappointed. It opened the war project in the project pane and I was off and running. 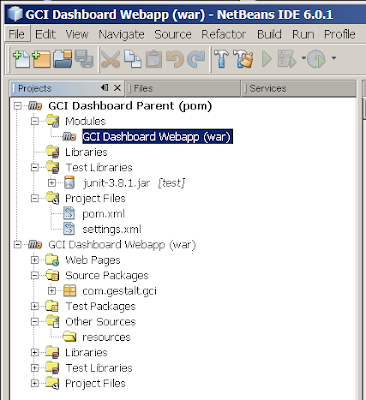 Right click on the project name to run the more common maven goals from right inside NetBeans. To run custom goals, you can create a Custom > Goals... goal that you can use to chain together whatever goals you want for a maven execution. This is the only thing I did that actually created a custom file on my filesystem. Everything else was native.

How's that for a slice of fried gold?

So, here's a big high five to to the Mevenide team on a job well done! (And update your NetBeans project page to highlight that it works in Netbeans 6.0. This is important news to advertise!).
Posted by Jeff at 12:24 PM 9 comments: Links to this post