From Accept Defeat: The Neuroscience of Screwing Up:

"This is why other people are so helpful: They shock us out of our cognitive box. “I saw this happen all the time,” Dunbar says. “A scientist would be trying to describe their approach, and they’d be getting a little defensive, and then they’d get this quizzical look on their face. It was like they’d finally understood what was important.”

What turned out to be so important, of course, was the unexpected result, the experimental error that felt like a failure. The answer had been there all along — it was just obscured by the imperfect theory, rendered invisible by our small-minded brain. It’s not until we talk to a colleague or translate our idea into an analogy that we glimpse the meaning in our mistake. Bob Dylan, in other words, was right: There’s no success quite like failure."

I just recently concluded a first sprints worth of work using Grails for the first time. We delivered.

While cutting the release, I found one additional gotcha in our CI environment. The grails application.properties file holds several key pieces of information including the version number, grails plugin versions and the last build date. This means the file must be checked into source control, but is also modified locally every build by CI (Hudson, nudge, nudge, wink wink). This caused our build to fail while bumping our project version.

Here is a quick reference for adding a Grails project to Hudson. I'm assuming the webtest plugin is installed becuase there is no reason not to use it. It rocks. Also note that for integration into my existing maven build, I'm using the built-in Grails v1.1.1 maven integration. The project structure was created via the maven archetype:

With that, here is what works so far:

General sequence (these are also the steps for keeping a development team in synch):

Problems you may run into:

I hope this helps. For the few items above that have lingering questions, I would be interested in hearing if you have solved these. Let me know.
Posted by Jeff at 3:52 PM 1 comment:

"Shipping is a feature."

Another good variation on Perfect is the Enemy of Very Good:

"A 50%-good solution that people actually have solves more problems and survives longer than a 99% solution that nobody has because it’s in your lab where you’re endlessly polishing the damn thing. Shipping is a feature. A really important feature. Your product must have it."
-- http://www.joelonsoftware.com/items/2009/09/23.html

For all you developers that rely on Hudson for continuous integration build status, I have released version 1.0 of the Hudson Status Gadget for Google Desktop. The code is part of the Hudson project itself, so it is open source.

More information can be found on its home page. 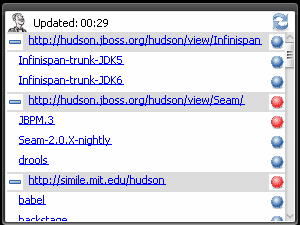 Enjoy and let me know how it works out for you.
Posted by Jeff at 9:27 PM No comments: