Global Collaboraton In the Second Grade

I just finished reading The World is Flat by Thomas L. Friedman. He had some good insights and specific example about how the world is increasingly connected and how it functions as a global marketplace. The most interesting take away I had was that simply providing the cabling into countries that had not been previously connected was enough of a spark to allow individuals with curiosity and an innovative spirit to engage a global community.

Those of us in the software business, take this interconnectedness for granted now. I find it fascinating, being a father of two, that my children will know no different; the world was always connected. In the span of a single generation the world got very small indeed. I have friends who grew up their entire life in single small town. Any road trip of more than 100 miles was a big deal. But my kids won't have to "go" anywhere to instantly know what is going on on the other side of the planet or to actively collaborate with people on other continents. 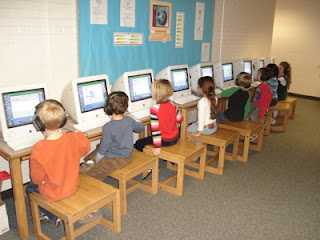 So with this in mind, I had an idea for an education software project. My second-grader already has computer lab class once a week where he and his classmates learn and solve problems on a standalone system. What better time to learn about teamwork, on a global scale, then now, while he is in school.

My idea is a collaborative system that lets kids work together to solve and reinforce basic school (and life) skills. As math is a universal language, it would be a good first subject.

A wide range subjects and grade levels could be taught, of course, but for starters, this could get the ball rolling. I envision my kids being excited one day, coming home from school, "Dad! Guess what? I learned division and fractions with a kid from China today! Her name was Ming Wu! It was so cool!"

Interesting idea, but how do these kids overcome the time zone difference? When it's 9am in the U.S., it's 9pm (or thereabouts) in India and China.

Good point. The internet makes the world seem so accessible, I sometimes forget that the people on the internet are using it at different times.

I am reminded of a idea that may work in that case. It is the same idea that this Google TechTalk proposes for solo version of a human-powered image labeling game.

This is obviously not as powerful a motivator as working with another live student, but at least the students can get a feel for how another person, from another culture, contributed to the problem solving.

Another idea might be to capture each solution step as an email, the same kind of concept used by email chess.

It is an interesting concept. One that I know happens (in less technical norms). My son's school does this with writing skills and snail mail.

But, I think the real problem will be "matching" skills...and coordinating classes. I think that there is value in globally communicating and using the Internet to do so. However, I believe the reward for collaborative learning is very low.

Just looking at the cognitive learning experience associated with working professionals. I'd say that there is very low learning associated with Internet collaboration. Sure, work gets done - but it depends on individual skills and abilities - not the collaboration to promote the cross learning.

That said, it would be an interesting experiment. I'd love to help you build it.

Having spent almost more of my working life outside the United States (as well as both of my kids being born overseas) I can assure you there is great value in exposing second graders to other cultures and kids. Starting this exposure early, will ensure we move far away from the "local-yocal" attitude that I know exists still.